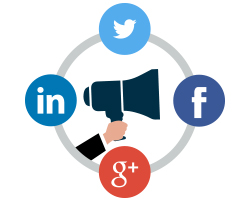 Events with an older attendee base require different social media strategies than events teeming with millennials. The former might only require an emphasis on Facebook to account for the fact older generations use platforms like Twitter and Instagram infrequently. The latter situation, however, needs to include a host of popular social media platforms to reach younger generations.

Read our recent report on millennial media usage and its ramifcations for mobile event apps.

Building a social media campaign around a Twitter account with three followers might not be the most effective use of time. For companies or organizations without a big following on any social media channel, using demographic information to target attendee’s prefered platforms is a great start. Those with significant more Twitter followers than Facebook, however, might want to emphasize hashtag-specific messaging and shorter Tweet-friendly posts to ensure efforts aren’t going unnoticed. Regardless of where current followers are located, start adding new followers as soon as possible by incorporating social media links in email communications and online.

A marketing strategy serves as the foundation for any social media campaign. In short; what type of message is being promoted and what are the overall goals of the event? Raising awareness over a cause and generating leads for sales efforts are two different objectives that ultimately require variations of a social media campaign. A marketing strategy also helps determine important details like tone of voice for social media campaigns. Posts on social media might be professional in nature or alternatively fun and light-hearted based on overall objectives. Understanding big-picture goals in advance help to solidify the details and gets everyone on the same page.

A marketing strategy extends beyond social media to encompass everything related to event promotion. Read AppBurst's complete guide to event marketing and promotion.

Compile Twitter handles and other social media profile information of key speakers and exhibitors. Connect in advance and urge the companies and individuals to announce their part in the event via social media. By establishing social media relationships early in the process, event planners and organizers are also able lay the foundation for better networking and buzz-worthy posts once attendees are at the event and looking to interact with important invitees.

Many event planners and organizers are already promoting an equivalent of #eventname2015 as the go-to hashtag for any event-related posts—both from event hosts and attendees—to ensure activity is funneled into one spot for easy integration in a mobile event app. The hashtag needs to be determined well in advance and used by event planners and organizers prior to the event so attendees see the hashtag and know to include it in their own posts about the meeting, conference, or trade show. For events with an emphasis on lead generation and reaching those not attending the event, consider secondary hashtags related to the industry and toy around with different combinations. Another hashtag (i.e. #educationtrends) might take off and create content for not only attendees, but those around the world with an interest in the topic. Assemble a Team and Delegate

If numbers allow, consider delegating one person to be in charge of each social media account. Also make one person the de-facto picture taker—someone who can quickly share photos with everyone else to include in posts. For companies and organizations short on man power, consider using a solution like everypost.me or Hoot Suite that posts to multiple social media accounts at once with the ability to tweak each message as needed and schedule posts for future dates.

Create a Timeline and Milestones

Don’t inundate attendees with posts months before the event—the biggest goal should still be event app adoption to ensure everyone recieves social media posts when it matters most. Consider sporadic posts meant to generate intrigue aimed at not overwhelming potential attendees with an eye towards bigger milestones as the event approaches. These strategies often differ from event to event, but a good rule of thumb is to start actively promoting the event 2-3 months beforehand. Also implement a short and informal editorial calendar with subject matter to avoid double posting content—unless in instances like promoting a registration deadline that warrants multiple posts. Calendars also help with time-sensitive posts to ensure event organizers don’t miss out on the best day to reach attendees to convey a specific message.

Incorporate the idea of a year-round event app into timelines and strategies. Learn more by downloading our free white paper.

Pre-event social media campaign efforts involve significant research and planning. Many of the necessary steps don’t take a lot of time, but are still important to piece together in ensuring social media posts aren’t simply being made for the sake of posting and nothing else. In parts two and three of the series, tips and strategies will be shared to maximize the rewards of all the due diligence put in before the event.