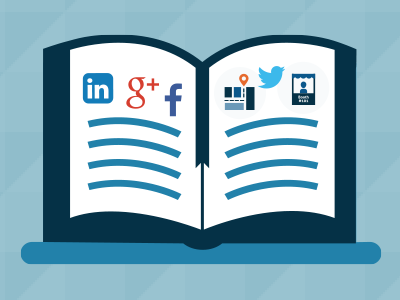 Exhibitors at a conference or trade show are faced with the important task of leaving a lasting impression on attendees. On one hand, the ability to personally interact with significant numbers of people in a given industry in one place represents a huge perk rarely enjoyed in another setting. Yet time at an event is finite and other exhibitors compete for each attendee’s time and attention. Event exhibitors who utilize social media--especially in conjunction with a mobile event app--are ultimately able to stand out from the crowd.

The most common benefit of using social media at an event is of course exposure. From generating buzz about upcoming demonstrations to consistently driving traffic to a booth for sales pitches or to simply increase awareness about a product or service, tapping into social media sites used by most attendees on a day to day basis is a good thing. Other benefits exist, however, that may be less obvious, but are just as helpful to exhibitors. By remaining active on social media and personally responding to comments, retweets, and so forth, exhibitors can indirectly build and solidify relationships with key industry leaders and potential clients, while building up a mailing list of contacts and leads in the process. Activity on social media also reaches those unable to attend the event.

Consider a situation where hundreds of exhibitors are vying for attendee’s time during a two-hour window before lunch one day at a major trade show. While most exhibitors are merely hoping for attention, one enterprising organization decides to use the event’s official hashtag to promote free snacks at their booth in exchange for five minutes to watch a demonstration and fill out a short questionnaire. Timed perfectly as attendee’s stomach’s are growling, word quickly spreads and nearly a third of all people in the exhibit hall wander over to the booth. Some staff members are ready with iPads open to their own branded mobile app, sharing PDF brochures and other material with attendees. Others hand out snacks and comment cards as the demonstration begins. In a matter of minutes a significant amount of networking and lead generation is taking place, all before attendees go to lunch and have time to think about the last booth they visited--all accomplished with a few seconds of social media wherewithal.

Benefits of utilizing social media are plentiful and take little work to implement, yet implementing a strategy in conjunction with the event’s mobile app not only increases potential exposure to attendees, but represents a win-win for everyone involved. For their part, event planners should ensure all important social media channels are integrated with the mobile event app and promote a hashtag to be used in all online correspondences.

Assuming social media use is being promoted by the event host, exhibitors can tap into this resource by using the meeting or conference’s official hashtag to promote their booth, while both sides can agree--either at a cost or for free--to promote exhibitor-related happenings through the event app social media feeds. Using this approach, exhibitors are not only able to reach attendees through their own social media networks using the pre-approved and promoted event hashtag, but also become a part of the event host’s overarching social media campaign. Ideally, all of these social media posts are aggregated in the mobile event app in real time, a tool most attendees are engaging with already to access program information and navigate the exhibit hall.

Start early and tell your existing networks about the upcoming use of social media at the event. Also, an often overlooked task is to tell people in advance about any booth number and location information. Drum up anticipation for any demonstrations and giveaways to create buzz and get staff members used to interacting with attendees on social media. Make sure to follow up with posted comments and generally stay active in the weeks leading up to the event. 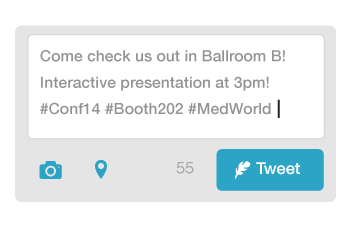