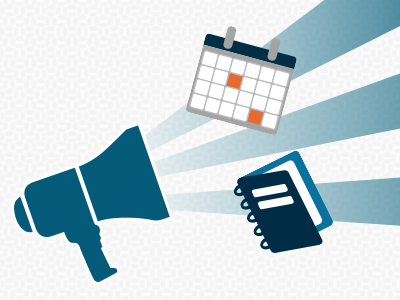 The addition of scheduled push messaging to a mobile event app’s feature set gives event hosts and planners another tool to not only engage attendees, but generate additional revenue and ensure users receive vital information when they need it most. Perhaps more importantly, the ability to schedule push alerts streamlines an important element of any event planner and organizer’s role before and during the event. Continue reading to learn more about four major benefits of scheduled push messaging for event apps.

Promoting an event and its mobile app involves a concerted effort on the part of event planners and organizers. Take much of the day-to-day difficulty of promotion away by scheduling push messages—along with social media—on weekly or bi-weekly basis instead of wasting time each day on the tedious task of deciding what and when to post. Scheduled push notifications effectively notify app users on everything from registration and travel logistic reminders to getting attendees excited for specific sessions, speakers, and other happenings at the event.

Once the event app is published and available for download, as well as the event schedule and other key dates known, event hosts can develop a strategy and queue push notifications weeks or months in advance to take advantage of the engagement afforded mobile app users with receiving push alerts. Utilize other features like deep linking to share specific app content with users as it becomes available in the app and plan a promotion strategy centered around checking in with attendees and even those not attending the event on a consistent basis.

Attendees arriving at the host city and attending early sessions are full of questions that often leave event planners and organizers scrambling to utilize more personnel at the registration desk and print out signage to spread around the facility. Mitigate confusion during this hectic time period by scheduling logistical information to be shared via push messages well in advance. Consider things like public transportation and hotel info the few days before the event begins, as well as information to any opening networking events. Attendees are also likely interested in knowing about registration locations, where breaks take place, how to logon to WiFi, and other commonly asked questions that might be tucked away in the event app’s FAQs, but that also can greatly benefit from the timely engagement of scheduled push alerts.

Conferences and meetings naturally have sessions or speakers that warrant greater emphasis than others. These important events—from an influential keynote speaker to industry-changing demonstration—also require bigger promotion efforts to ensure as many people as possible attend. While it’s difficult to sustain diligent promotion efforts during the event, scheduling push alerts well before the event begins takes away any chance these key moments aren’t being under-promoted in the days and hours beforehand. Consider using event app surveys in the months leading up to an event to gauge the importance of certain topics for events that might not have an obvious highlight. The ability to understand which sessions will resonate most with attendees and promoting accordingly via scheduled push alerts helps maximize an event’s effectiveness for everyone involved.

Make sure event speakers and exhibitors are on board with a mobile app to maximize ROI for everyone involved. Learn more.

Events with exhibitors and sponsors are greatly impacted by scheduled push messages if and when hosts are willing to add this value-added promotional tool to their ad packages. Simply offering to send a push alert about an important product demo or giveaway at a company’s booth isn’t nearly as effective as promising the alert goes out exactly 20 minutes beforehand with a deep link sending users directly to the appropriate detail page in the app—complete with the time, location, and benefits. Sell the value of scheduled push alerts as an extremely interactive and real-time tool with the ability to dictate attendee interaction down to the minute. Along with more traditional sponsor features such as ad banners, splash screens, and dedicated sponsor sections a mobile event app, the use of scheduled push alerts serves to generate additional revenue for hosts of conferences, meetings, and trade shows.

For more information and to speak with an AppBurst representative: